Why Do So Many Fail At Losing Weight & Burning Fat?

It’s no secret that the vast majority who seek to lose weight and burn fat have a very low success rate, despite trying a large number of proposed solutions. From fat burning supplements to strange diet plans, nothing is off limits for someone who wishes to burn off their excess belly. But despite weight loss being such an important goal for millions of people, why are so many seemingly becoming fatter by the day?

Firstly, many fail at achieving results due to the weight loss supplement lie. Countless companies claim that a pill or powder is going to melt fat from anywhere on the body; this on the surface sounds very appealing, as who would not want to simply swallow a pill once or twice per day without modifying diet or exercise habits? That is the dream solution, and weight loss supplement companies pump many millions of dollars into powerful advertising that convinces many that this is a viable option. Unfortunately, it’s not, and despite substantial weight loss supplement dollars being invested by many without results, most do not learn their lesson, and continue to experiment in vain.

Secondly, fad diet plans that erroneously promise fast weight loss results are the norm. Many who begin such strategies see immediate changes in their body weight, believing that they are on the road to achieving all of their fat loss goals, but in fact, the weight reduction is in the form of water loss from a low carbohydrate level, and once the body flushes excess water, body weight stabilizes, and that initial weight loss comes to a halt. What’s worse, metabolism slows, especially in low carbohydrate or calorie deprived diet plans, and progress crashes because the body begins trying to retain fat in presence of what is perceived to be a famine. Yes, such diet plans mimic starvation type situations to the body, which breeds low energy levels, and primes fat cells to store as much calories as possible the moment any extra food is consumed. It’s a recipe for disaster.

Lastly, commitment to change is low. When weight loss supplement advertisers go out of their way to deceive the public by claiming that fat will be shed without diet changes by using a miracle pill, many simply write off the idea of modifying eating habits, and set themselves up for perpetual failure. But I will place less blame on the individual and more on dishonest weight loss supplement companies, because it’s very difficult for someone to embrace dietary change when they are being deceived into believing that they can eat the same way while looking much different. How is someone going to embrace a new diet path when it’s so difficult to find a plan that actually works, especially while simultaneously being bombarded with weight loss supplement advertising that promises it’s not even necessary to search for one, because they have the answer in a bottle, with no behavior change necessary?

I wrote Fat Vanish with the specific intention of destroying the many weight loss myths, and replacing them with a proven diet and exercise plan that is realistic, healthy, and most importantly, actually burns fat! If you’re tired of seeking answers from false sources, then give Fat Vanish a try, and you will SEE weight loss results that you never thought possible.

Why A Low Calorie Diet Plan Will Slow Fat Loss

Those who seek to quickly burn fat often opt for low calorie diet plan to try and produce the best possible results, feeling as if cutting food quantity to extremely low levels will force the body to use more stored fat as energy. Unfortunately for those who mistakenly construct a natural fat loss diet plan on a low calorie basis, results do not meet expectations.

When the body experiences an extreme calorie deficit, the first response is to utilize carbohydrates stored in the liver and muscle tissue as energy, since food quantity is low. This causes what appears to be immediate success, as scale weight drops dramatically (sometimes up to 5-10 lbs in one week), but the presumption is that this weight reduction is in the form of fat, when, in fact, due to the loss of carbohydrates in muscle tissue, the weight loss is actually in the form of water retention, which has no connection with the goal (to burn fat from problem areas).

Once carbohydrates have been depleted from the body, the next step is to seek alternate energy sources to fuel daily activities (since calories are low), but because the body becomes concerned with the small amount of food consumed, instead of efficiently burning away stored body fat as the preferred source of energy, muscle tissue is instead catabolized. This occurs since the body actually attempts to preserve body fat in case a famine is taking place (this is a built-in mechanism that we all have to protect ourselves when food supply is low). A vicious cycle then begins, because as muscle is burned away, metabolism (the rate at which the body burns calories) slows, which causes energy levels to drop significantly, and ultimately reduces the amount of fat that is burned from the body by a substantial margin.

Lastly, because metabolism has been negatively impacted by the muscle loss and starvation scare, the body is just waiting for the moment when food intake is increased, seizing on this as an opportunity to store away fat at record pace to prepare for the next possible famine. This is why those who follow low calorie diet routines tend to gain back all of their lost weight quickly, and find themselves even fatter than before they started to follow such a diet strategy.

The only type of natural fat loss diet plan worth following is one that does not starve the body of food, as this promotes a faster metabolism, helps to retain muscle, prevents dips in energy levels, and ensures that weight regain is not right around the corner.

Many who try to construct their own natural weight loss training program opt to avoid resistance exercise (such as weight lifting) due to the fear of gaining significant muscle mass. This is especially so with females, most of whom are not interested in building large muscles, and would instead rather tone and firm problem areas without increasing muscle size. But those who neglect resistance exercise due to the fear of gaining muscle are actually robbing themselves of an important fat burning tool.

The more muscle a body carries, the greater amount of calories are burned each day, and hence the lower body fat levels will ultimately be. When someone is overweight, the best chance of achieving a lean body is to have a metabolism which supports enough food to satisfy hunger, and adding muscle allows more food to be used for fat loss than is otherwise possible (hence cutting cravings, and improving the chance for long term fat burning results).

But what about those who wish to only tone, and are not interested in building muscle? Toning is actually the process of burning fat and building muscle, with the amount of muscle gained limited so that the body does not become bulky. This can be achieved by constructing a natural weight loss training program using a rep and set structure that promotes small to moderate improvements in muscle, so that bulk can be avoided, while still providing a metabolism boost and enhancing the shape of problem areas.

Those who fear that they will automatically gain massive amounts of muscle just because they begin lifting weights have been misled, and are in fact best served to implement a properly designed resistance training program so that metabolism and tone can simultaneously improve, producing a firm, attractive body shape, instead of a lifeless and saggy exterior. On the flip side, those who begin lifting weights haphazardly might find that they gain more muscle than they would like, so it’s important to follow a professionally designed exercise plan that takes into account your specific fat burning and muscle toning goals. 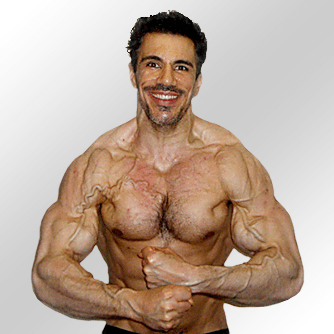